At Barbara’s and Sean’s place in Marulan we took the opportunity to check our money reserve and possible destinations as our Australian Visa would run out soon. We were facing the reality and that destinations like South America wouldn’t be possible for the moment. Checking flights to Germany we found an incredible cheap flight, just 6 days (including a long weekend) later. Suddenly everything was going very quick…

We decided to go “home” – without really having one after living 2 years on the road and the 7 years before in Prague, Czech Republic, not the easiest decision… We contacted some friends in Germany where we stayed for a few days before our trip to ask if they could give us a “shelter” for the first days. We received the lovely answer we could come without worry and move in into the old horse stall. While we have been away Anne and Olli were rebuilding the old horse stall and ever time people asked them why they are doing that they were answering:” Anna always wanted to have an atelier – and anyhow, one day Kerstin and Sascha will come back from their adventures!” ;)

Beside that we had to organize the transport of the motorbike. After getting quotes for shipping and flight tickets and knowing that we would need a vehicle in Germany to organize things, we decided to fly the motorbike. We were lucky we had a contact closer to Sydney in Windsor, Clarissa and Neil. They were going with their custom-made BMW’s through South East Asia the year before and anyhow we wanted to meet. Now they offered us to come to their place to organize our last things. Friday early morning we went into Sydney and at noon we had the DGC (Dangerous Goods Certificate) in our hands, visited the warehouse where we would have to deliver the bike Tuesday morning (Monday is public holiday, Queens Birthday) our Carnet stamped and our flights booked! Bam Bam, everything went like a breeze. Thanks again to Paul and Justin! You guys just rock! Business as it should be, no surprises, professional and on top of it very competitive!

Everything done, we had a look at the famous Bondi Beach and rode to Clarissa’s and Neil’s place. Clarissa’s lovely parents prepared a comfortable room for us and for the night a barbecue with friends was planned. It was just fantastic meeting them and all their friends, including another two motorbike traveller, (Chris and Charlie) and we spend a great night together sharing stories, adventures and experiences. When Chris heard that we have to deliver our bike on Tuesday morning and we will be pedestrians until our flight is going on Thursday morning he offered us to come over to his place on Monday so we have better public transport connections. We spent Sunday with Clarissa and Neil, having some fun rides with their bikes and putting a new front wheel on which Neil had spare. Monday we drove over to Chris and we had another delicious barbecue together with his friends.

Tuesday morning we drove through Sydney’s morning mist and arrived at the warehouse to prepare the motorbike for its journey with Thai Airlines. We stripped it first on an aluminum pallet. But after a test lift with the fork lifter it was clear that it would be too unstable. With another wooden pallet under it looked much better and we stored the panniers and helmets on it and wrapped everything in plastic foil. Finally it was done. Time to say good-bye! It is every time a strange feeling to leave our motorbike behind. But we had a pretty good feeling with the shipping company and nothing could be done anyhow anymore…

Being pedestrians now we were looking for the bus back to Chris` place, to Mona Vale, and when he was back from work we went together to the sailing club for dinner with another friend of him. On our last day in Sydney Chris took us around with his car and for the dinner we had our “last supper” at a Thai place together with more friends of Chris. Chris is going soon to cross South America, a five month trip on his motorbike; we have to admit we are a bit jealous… But before the trip he is coming to Germany and we hope he is visiting us!

Time to say good-bye to Sydney and Australia and we left early morning with the bus to the Airport. Our flight was going with China Western Airlines, via Shanghai. So we were facing another 34 hours travelling before we would enter Germany again… Still it felt unreal! 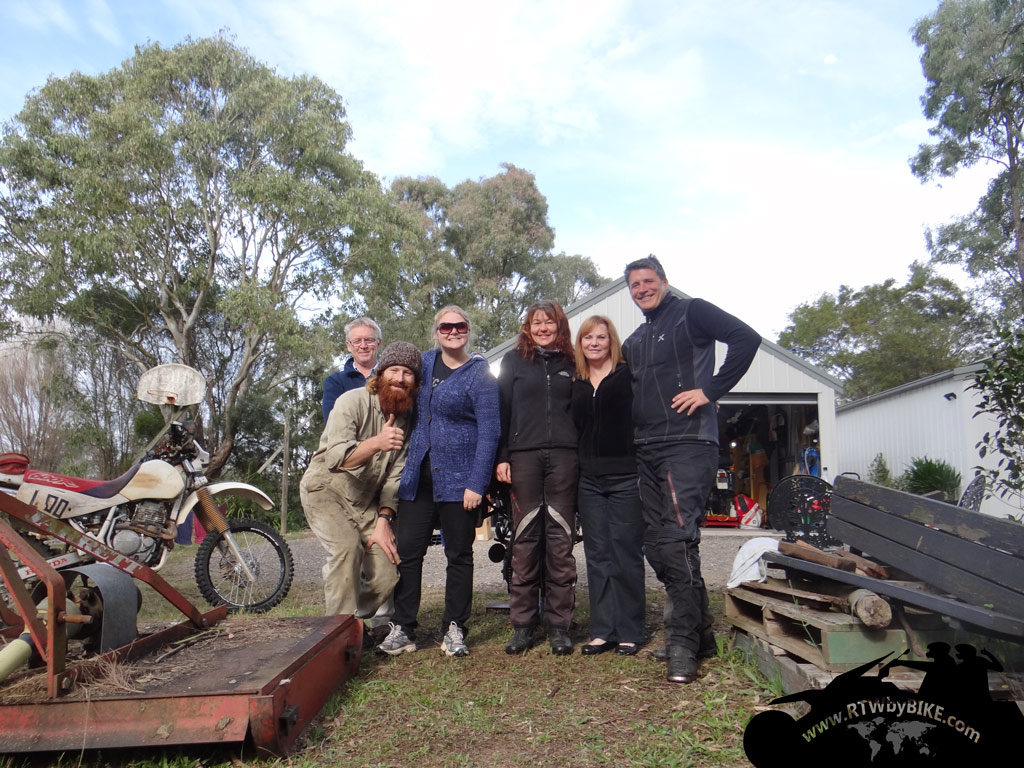 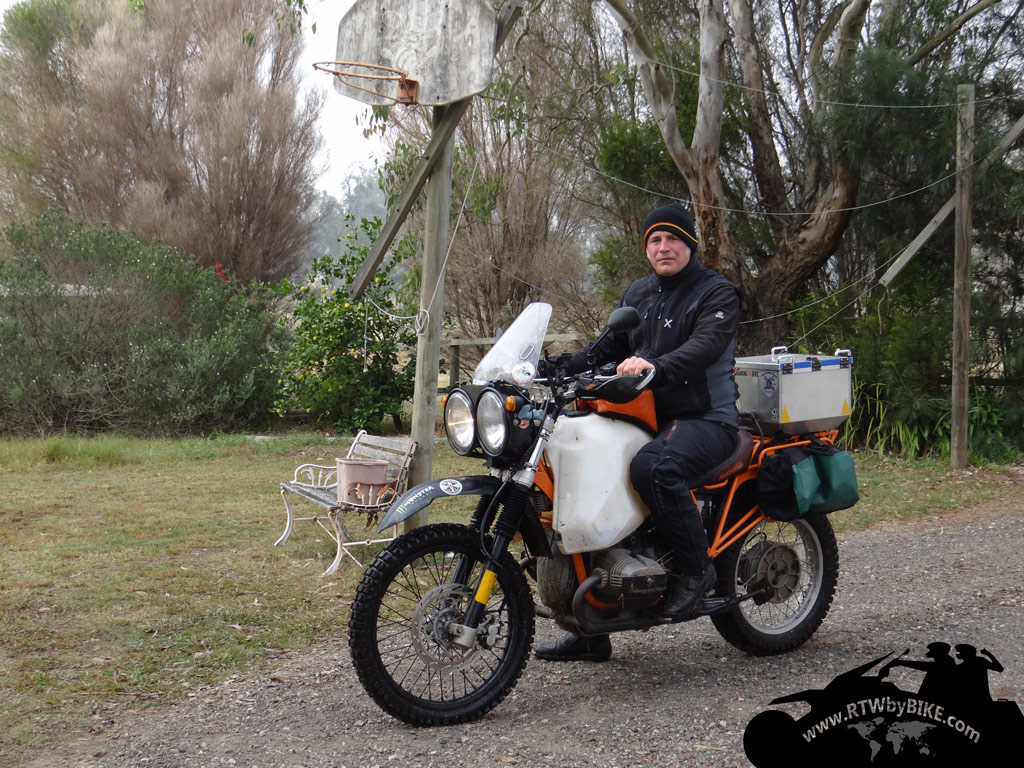 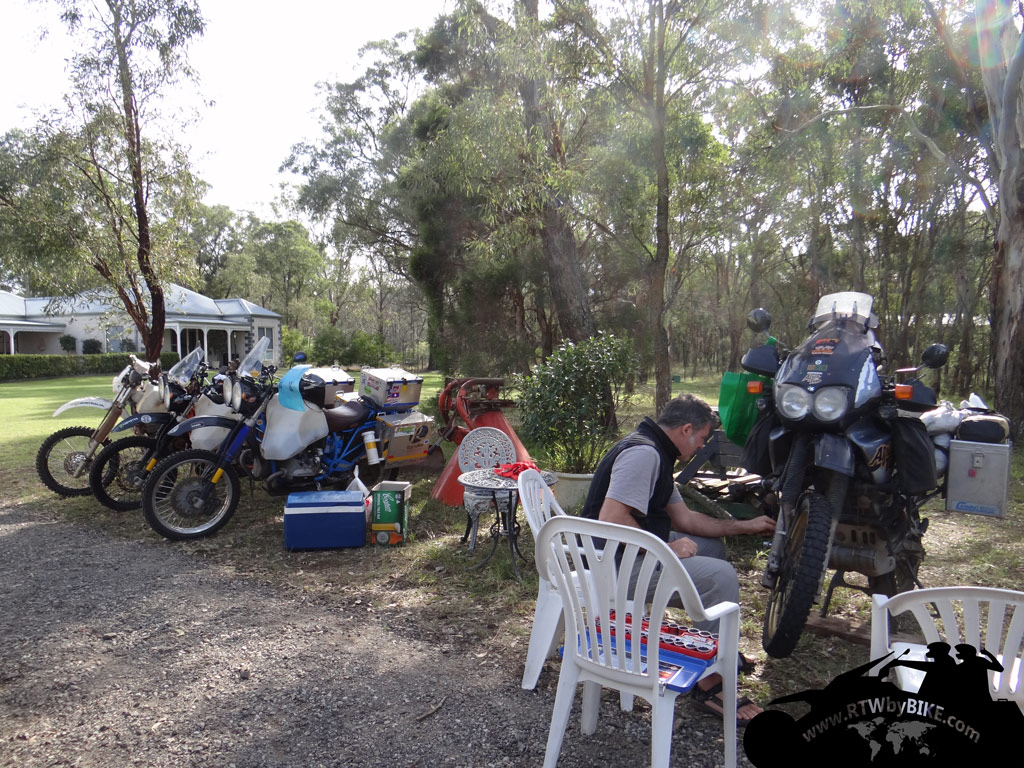 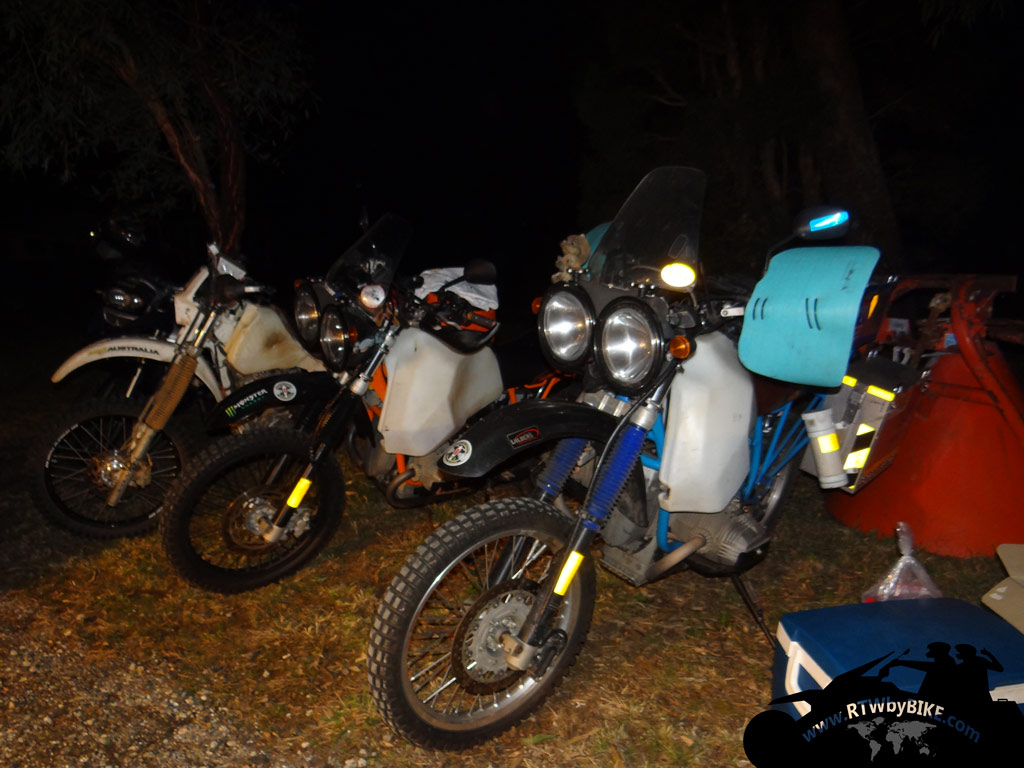 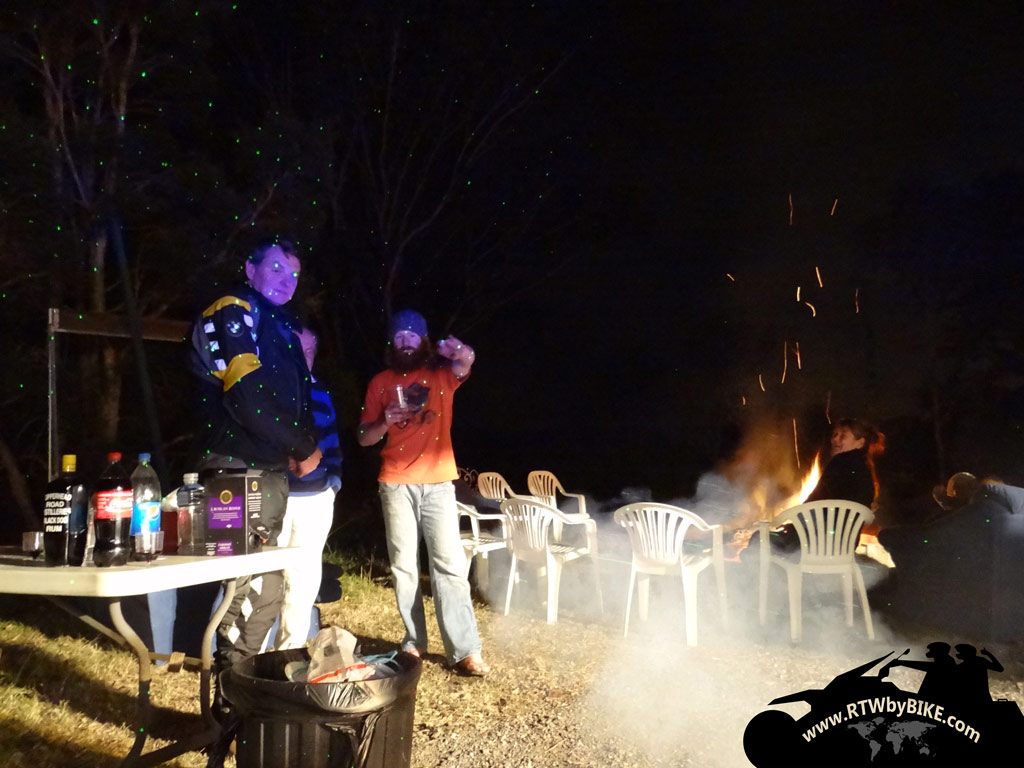 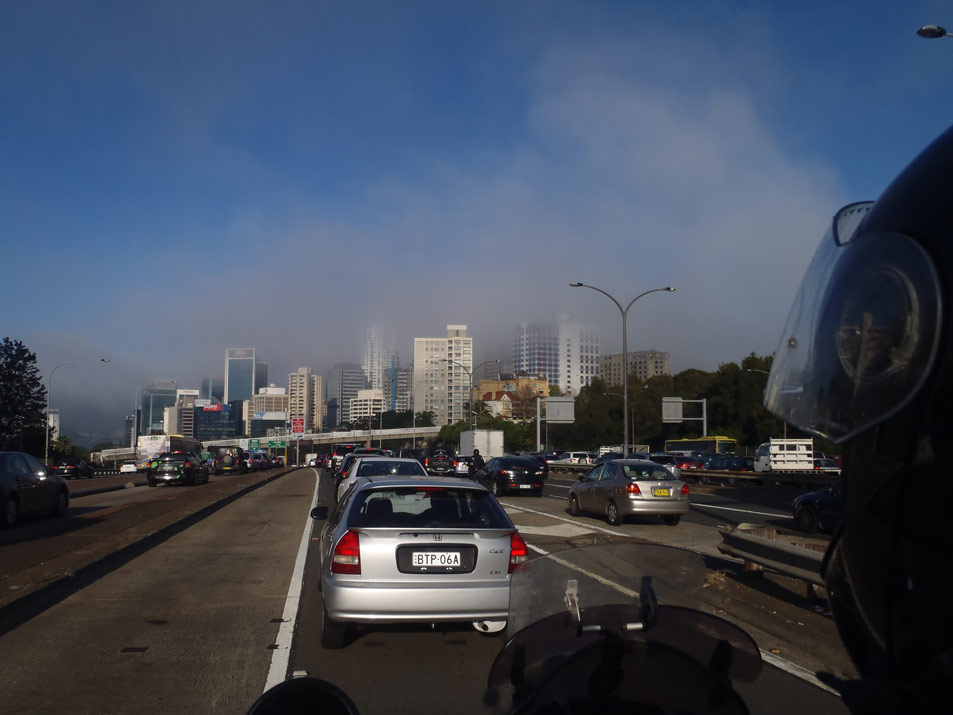 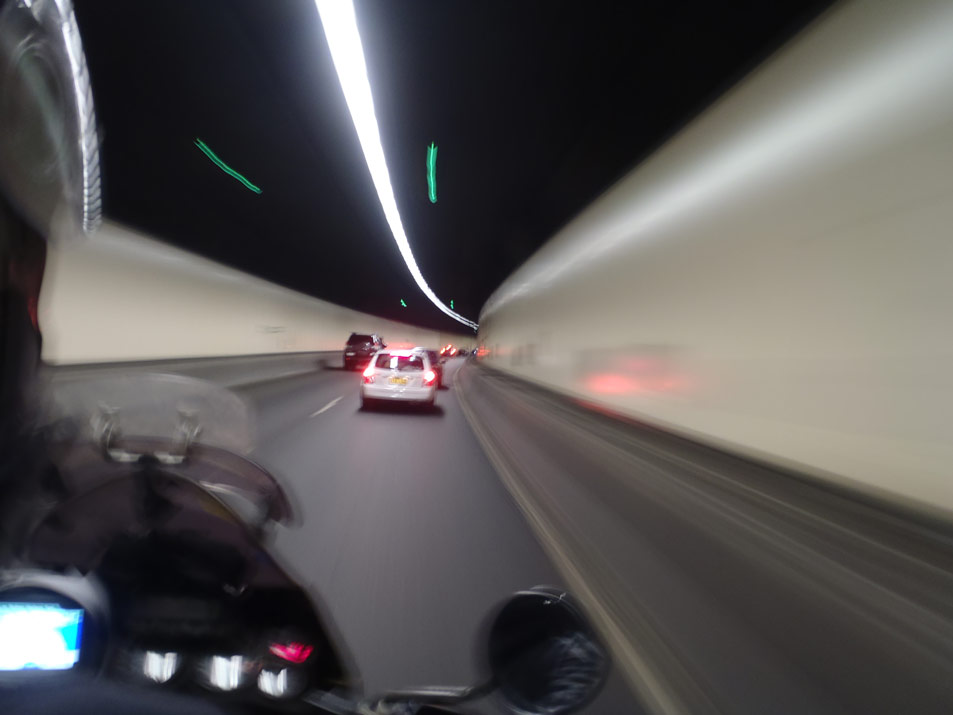 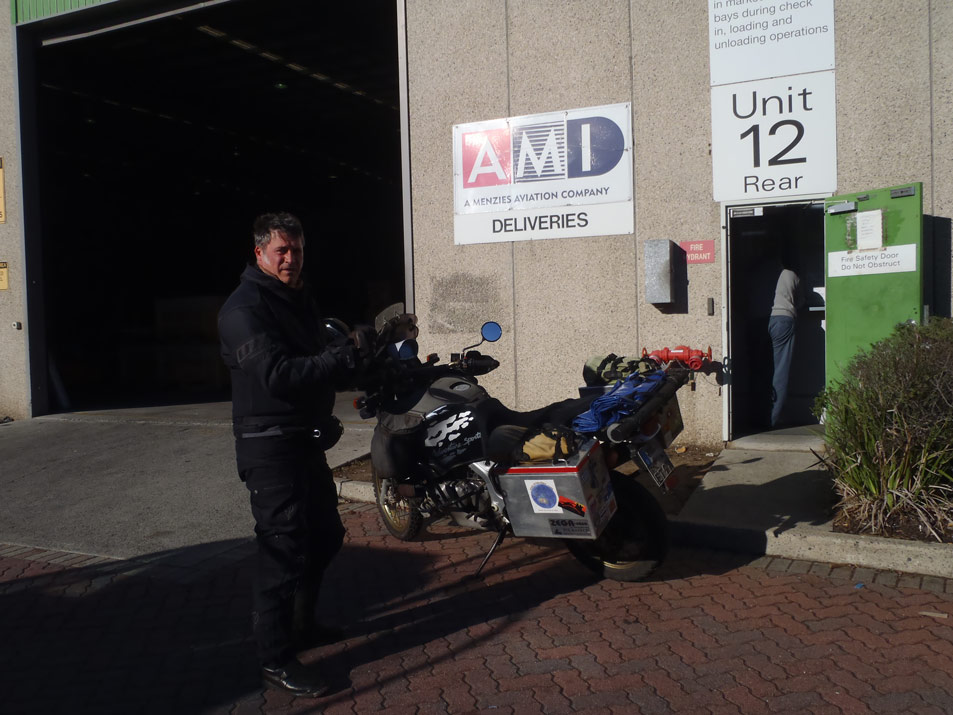 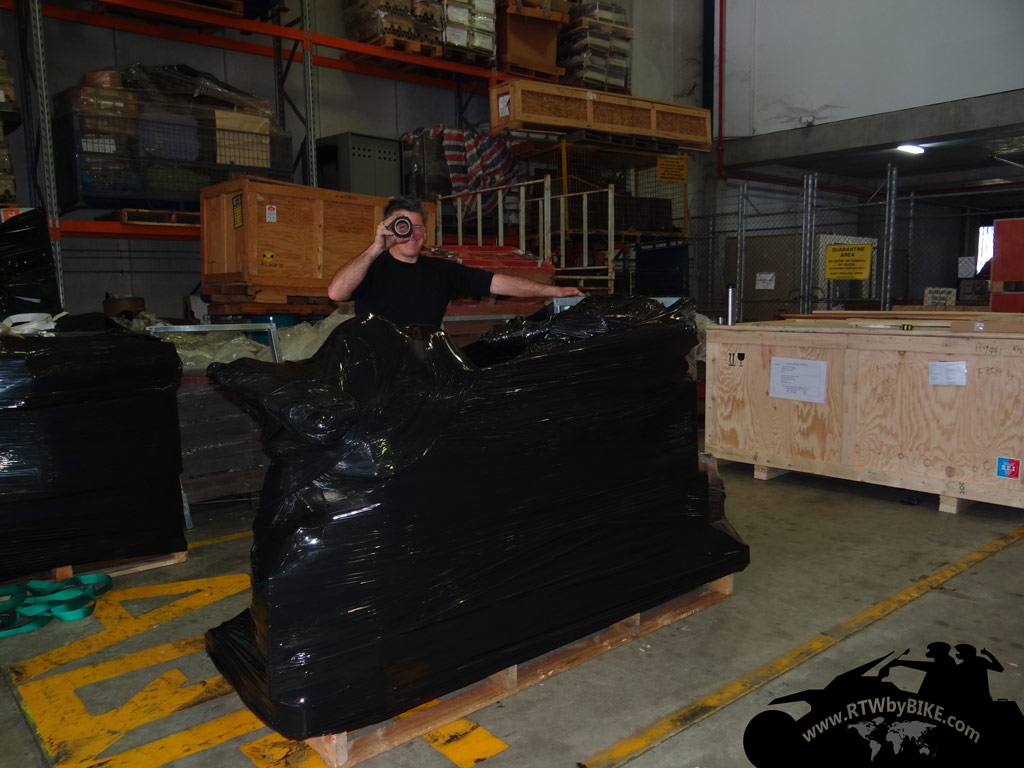 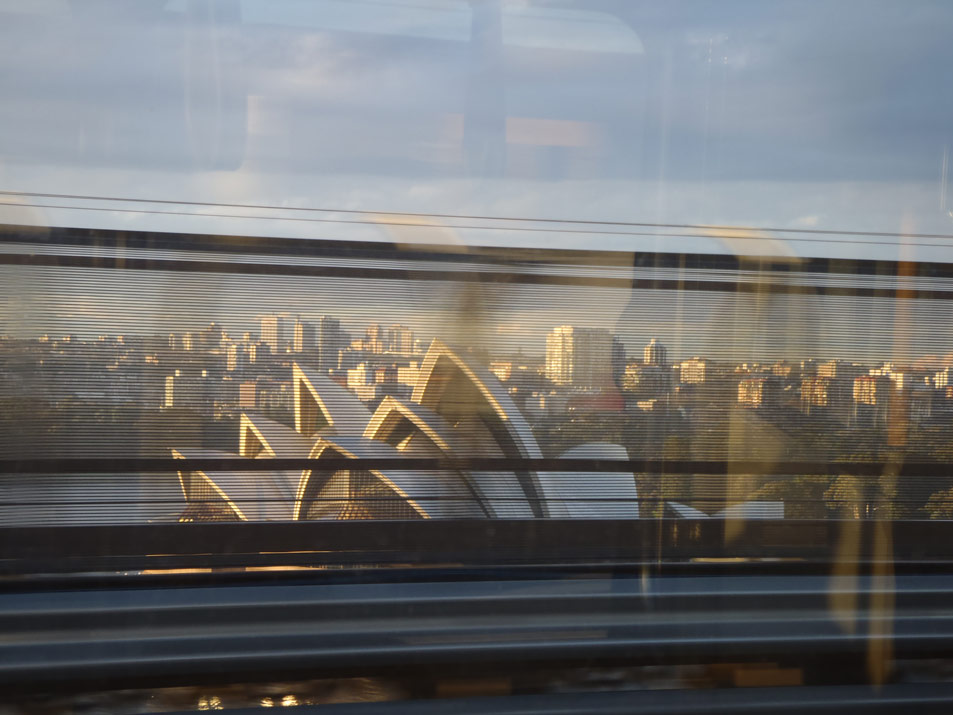 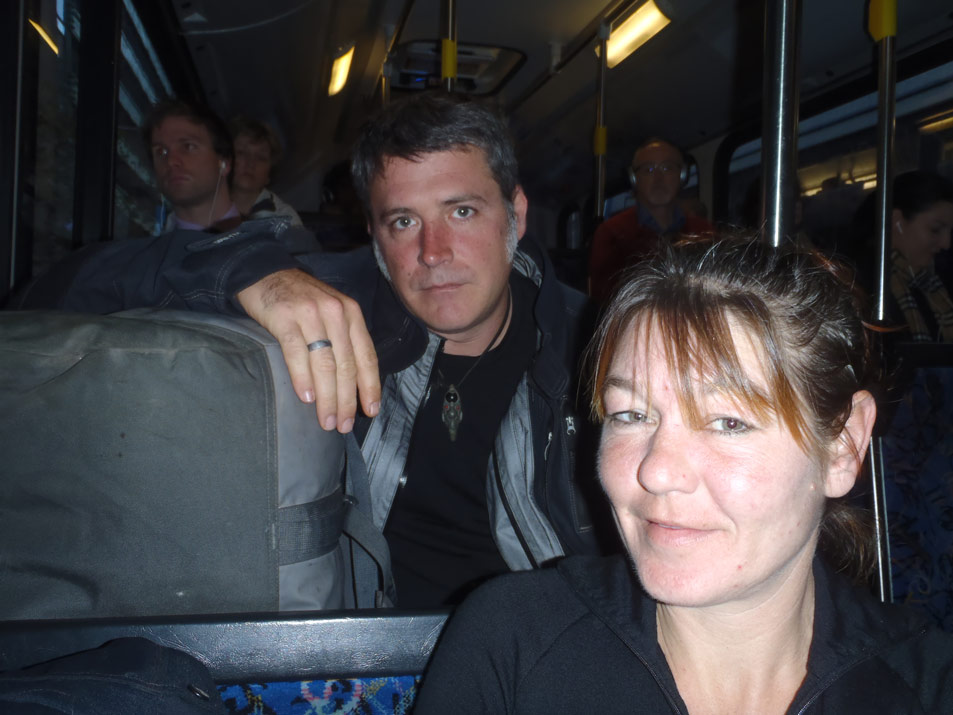 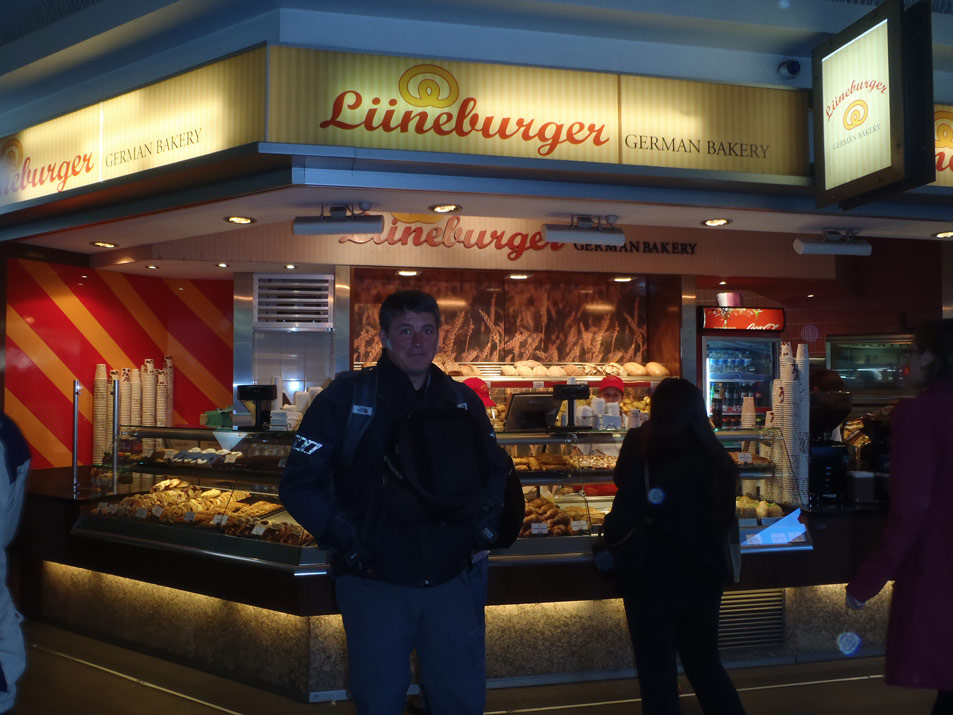 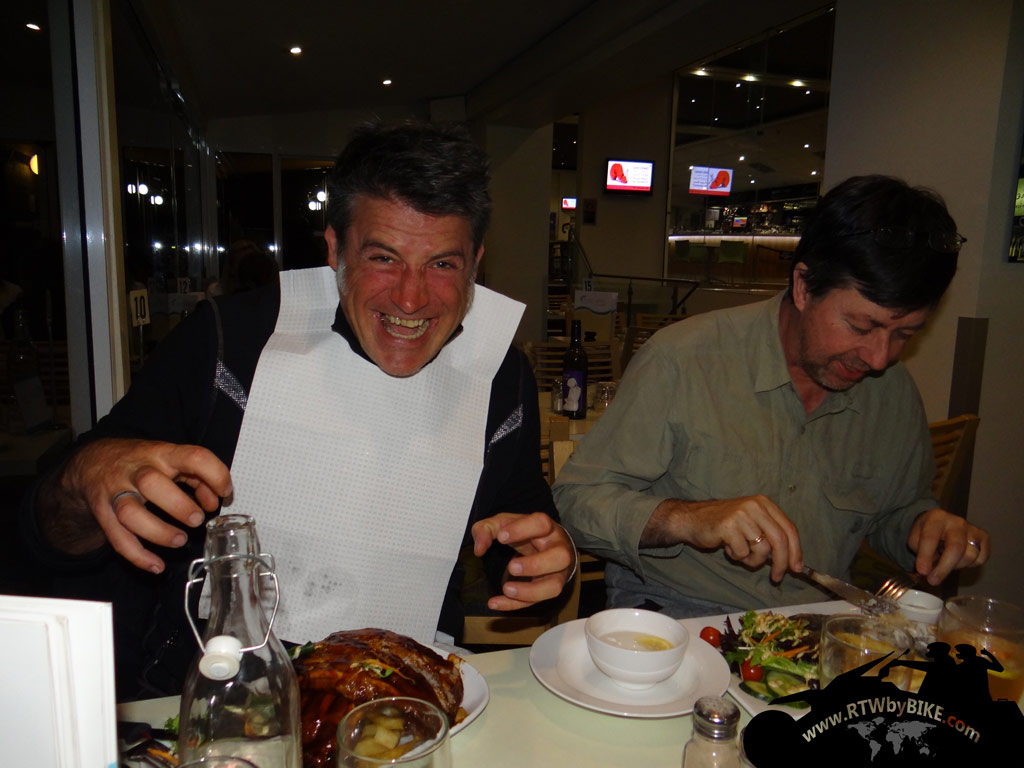 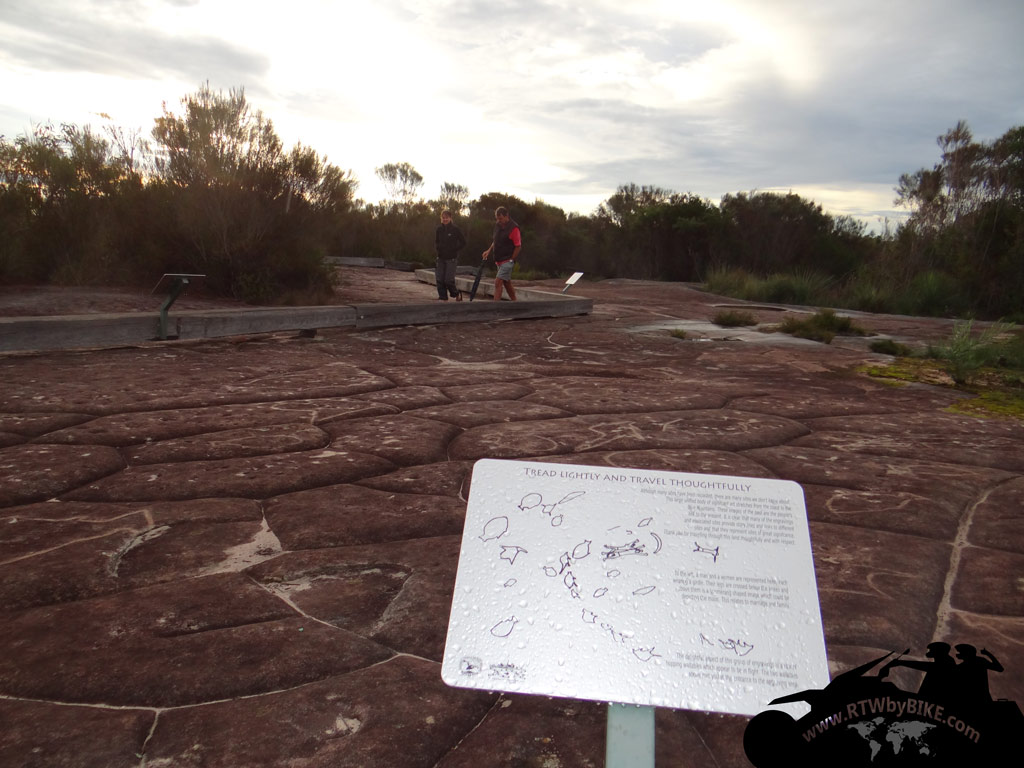 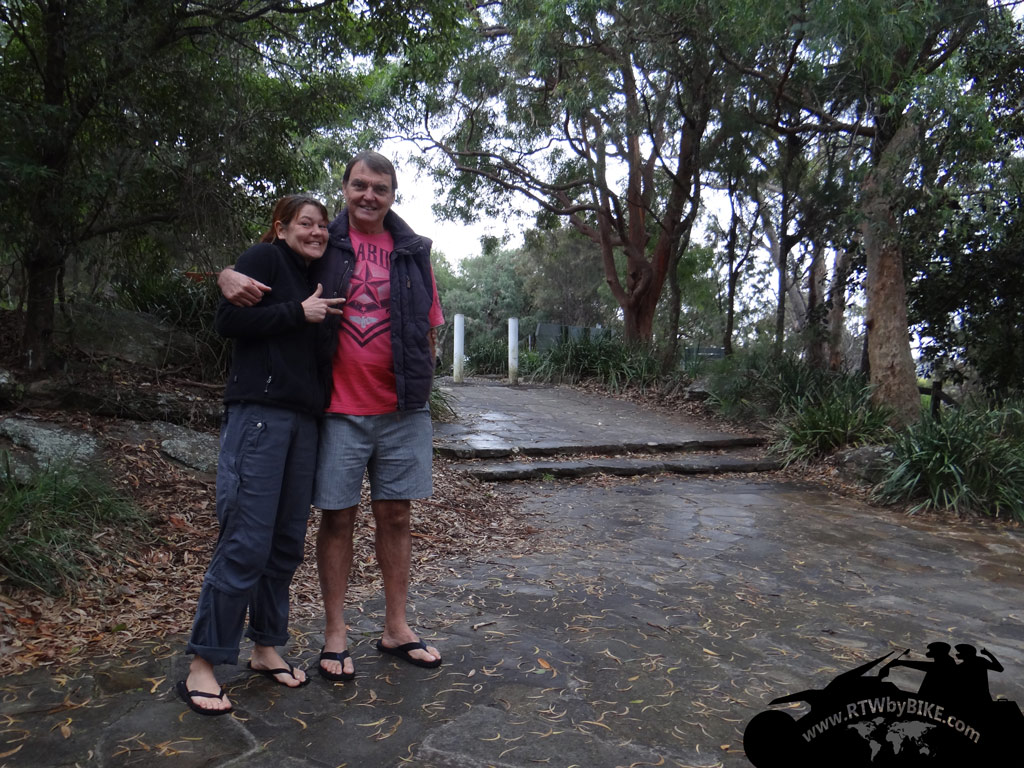 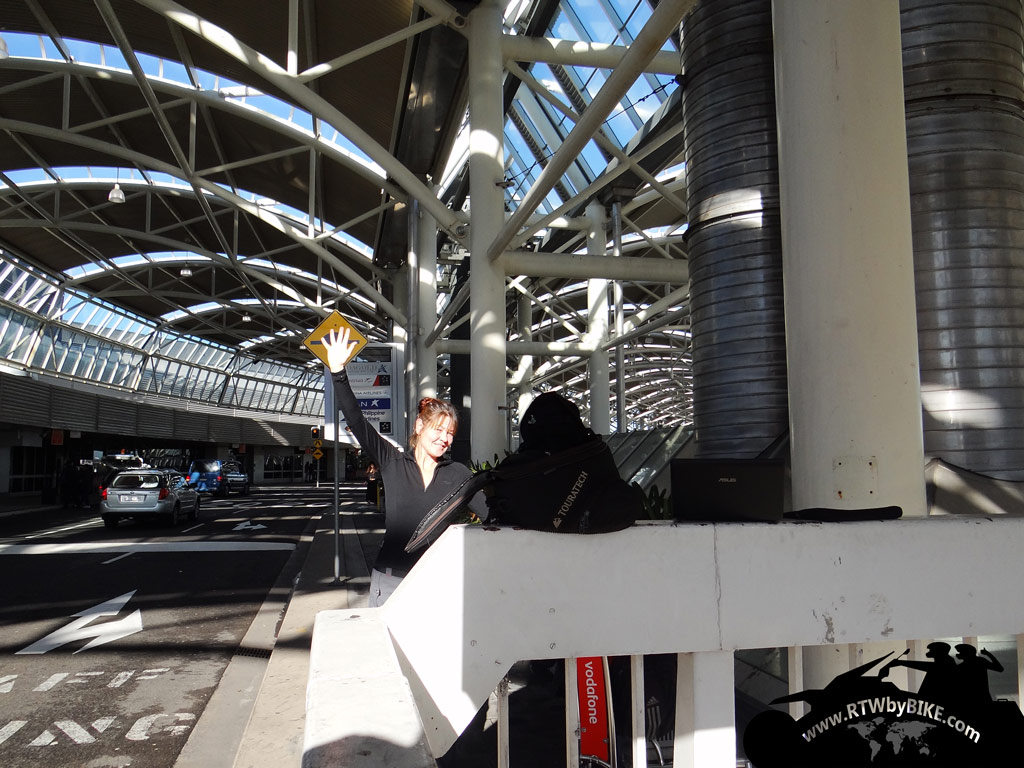 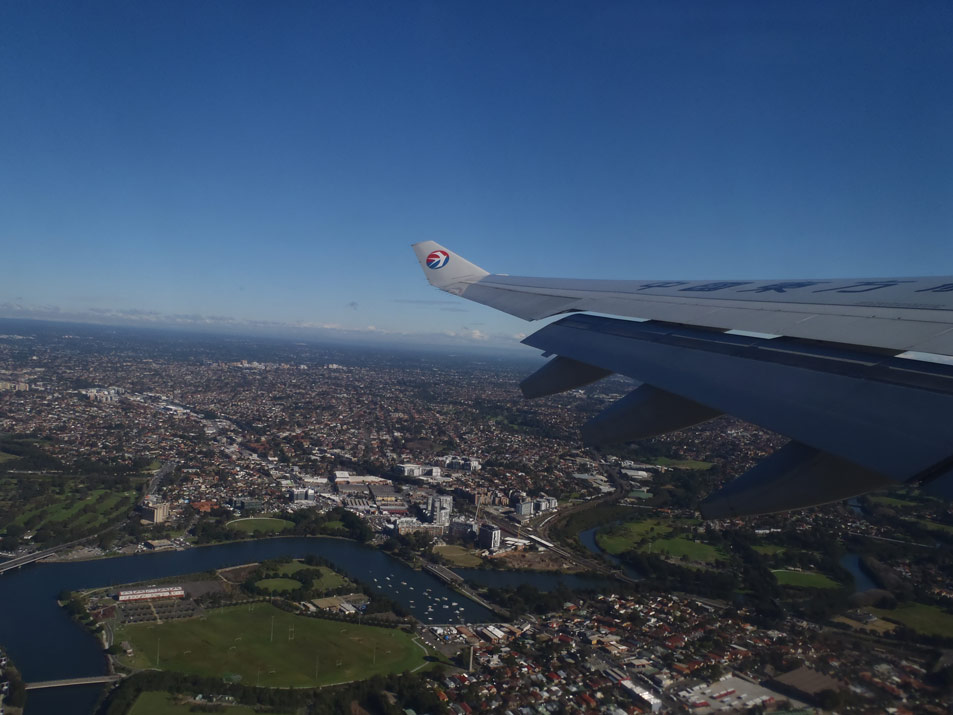 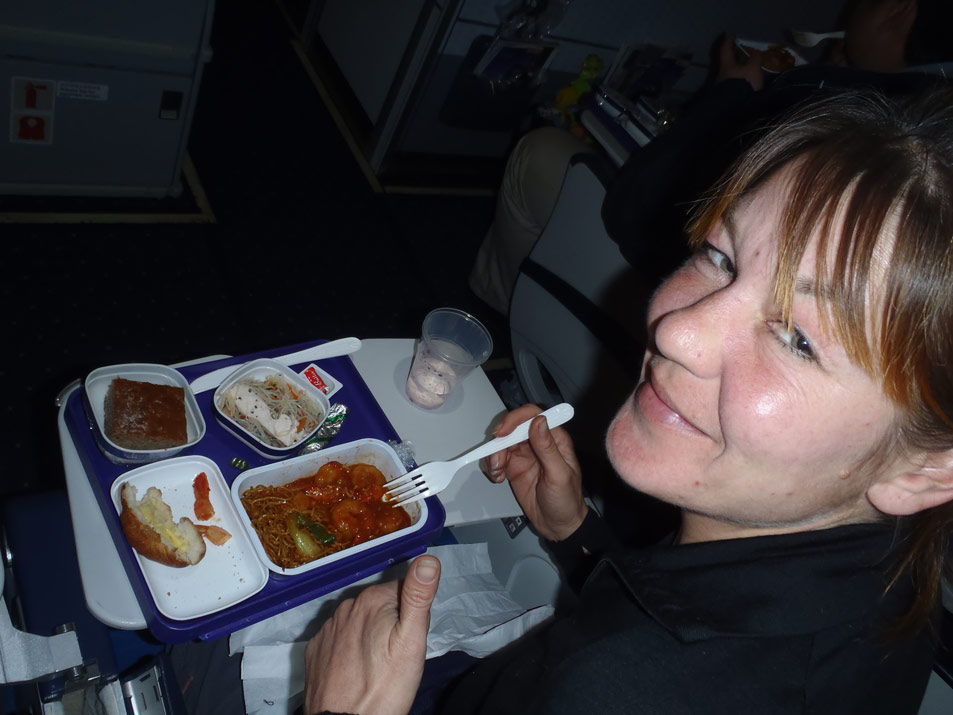 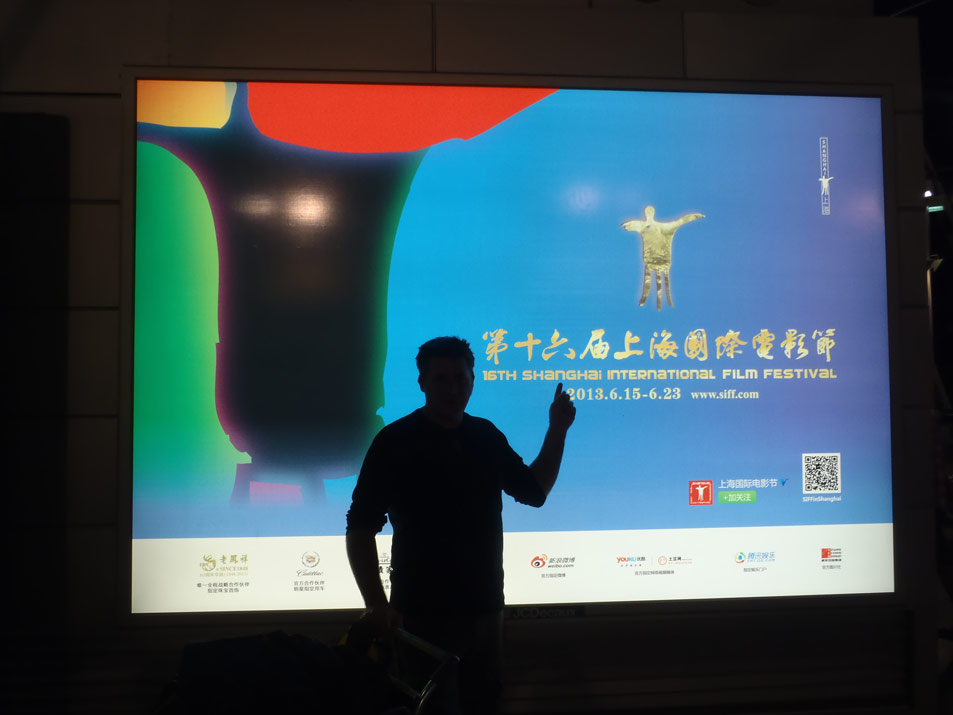 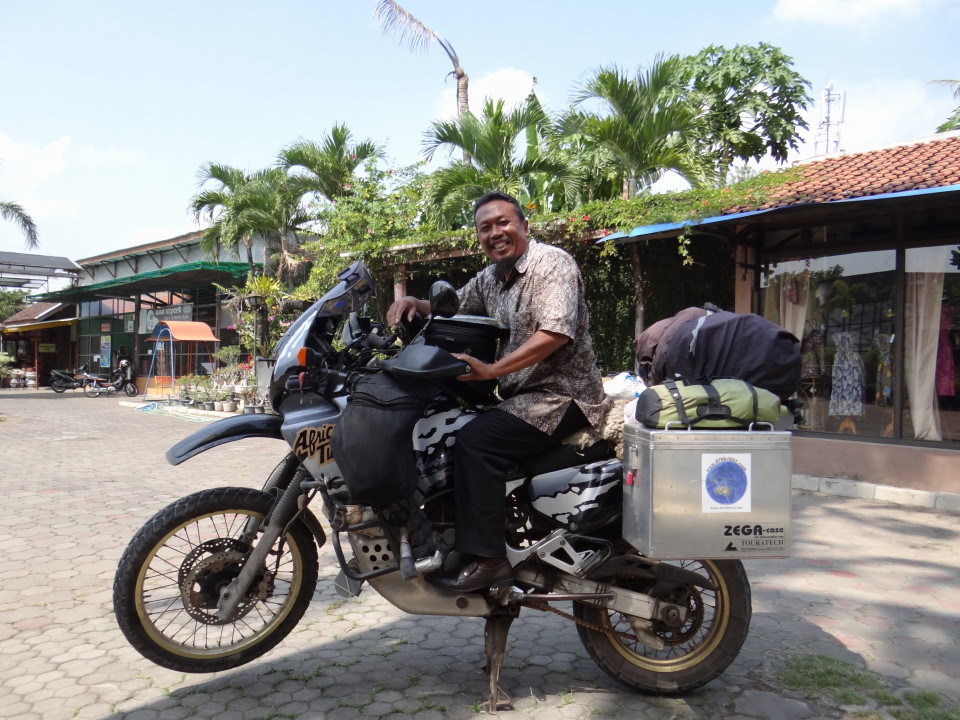