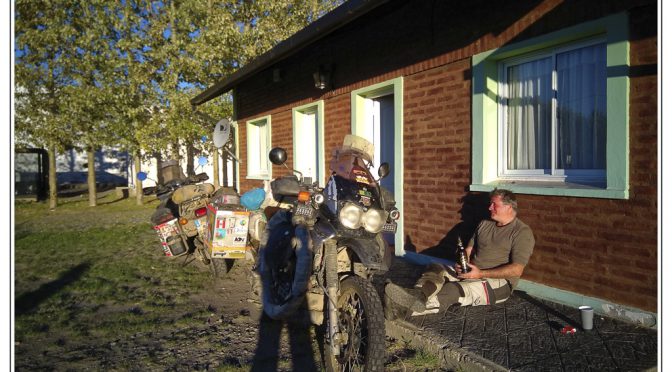 After being for two years (2011 – 2013) two up on Sascha´s Afrika Twin RD07 traveling Oceania and South East Asia we had now the chance to travel the Americas; this time on two motorcycles. Kerstin started to ride her own Transalp PD10 in 2014.  At May 19th, 2018 we started our journey and we flew from Hamburg to Anchorage to pick our motorcycles which we sent already a few days upfront. We returned to Hamburg on May 8th in 2019.

At the time we started the rough idea to travel the Pan Americana Route and we knew we do have only one year this time as Sascha got granted a Sabbatical Year. We did not see the purpose to ride up completely to Prudhoe Bay at the Arctic Sea (which is only accessible with a bus drive on reservation of the Oil Company who owns this part of the world). But we wanted to go up to the Arctic Circle and spend a night there.  If possible, we planned to reach Ushuaia and still having enough time to go anywhere up north again to ship the bikes back to Germany; from Montevideo Uruguay; Buenos Aires, Argentina or maybe from Valparaiso Chile… Calculating the kilometers (about 35.000 km or 21.750 miles) at the time we came to an average of about 120km per day. That does not sound that much in the first moment BUT taking it  into account that you maybe stay 2 or 3 days somewhere to go hiking, sightseeing or even longer to do maintenance and waiting for spare parts…

suddenly we were worried a little bit, to be able to do it in time. Of course, you can do it, the record is with 23 days by car – but that was surely not what we wanted. There are sooo many things to see and to explore on that stretch…and anyhow we are not the fastest travelers. We do not like to plan too much and let it roll spontaneously. We even thought of skipping the North America part – but Sascha said that will be Kerstin’s training section; and anyhow we were curious to explore Alaska… We agreed we will start as planned and we will see what is coming up and how it is going!

The wilderness of Alaska was pure freedom. And apart from the bears, nothing is dangerous. We were lucky with the weather, mostly sunny and no ice or snow on the roads anymore. It was a perfect start to the trip. Simply drive through the vastness of nature. And somewhere with the snow-capped mountains in the background pitch the tent and cook by the campfire and warm up.

On this journey we crossed 14 countries and we had 22 border crossings as we crossed the Chilean and Argentinian border several times to explore the Andes passes. Many people asking us what was your favorite? What was the best spot? And there is no clear or simple answer. Each of these countries has its own highlights and is well worth the trip. Breathtaking landscapes are waiting everywhere and the different cultures, the diverse foods and customs make each of these countries worth seeing. In terms of language, it was a bit easier on this trip than on the previous one: English for North America and Spanish for the rest. However, still a challenge as we are both only beginners in the Spanish language; and the dialects vary a lot.

From our point of view, it is very helpful to have at least a rudimentary knowledge of Spanish, even if it is not perfect. And you learn a little bit more each day. It makes it so much easier to get in touch with people, to shop what you need or to discuss with the police, the military and the customs officials. But the most important thing is being open, interested and relaxed – and always having a big smile. Because most of the people in this world are good, helpful, interested and welcome you warmly. And that is probably the most impressive thing we could experience and not only on this trip. Humanly, we did not have any bad experience – except maybe one immigration officer on the way out of Mexico, who was trying to supplement his pocket money and put us in a somewhat tricky situation. But in the end, we were able to solve this peacefully, WITHOUT paying the bribe. Here only in between noticed: we have never paid bribes. In our opinion, this is important because it would make it a habit or support to become one. In any case, once again we have met wonderful people in all these countries and we are extremely grateful and pleased for this experience. Again, we have received so much support, help and affection and it allows us to look back with humility on all these encounters.

In the end we did 47.255 km in 347 days (average of 136km per day) before we came back to Hamburg, Germany in May this year. The transport of the motorcycles from Buenos Aires to Hamburg was smooth. Only to get them out here at customs became a nightmare. They had a new European form and the officers were not aware of the process really… It is a shame that we have to say we experienced the most unfriendly and not willing to help or to support customs officers in Germany after all these border crossings! For sure there is a lot of room for improvement! Furthermore Sascha’s bike did not want to start anymore after the flight. It was not amused that the trip was over probably :) After we searched for hours for the problem and pushed the motorcycle out of the customs area at the Hamburg Airport; we had to call the towing service at the end. And that after 47.255 km the AT had run without problems even at extreme heights, in cold and heat, wet and dry… With the help of a member of the motorcycle community we finally found the mistake: a corroded connection plug.

The motorcycle community is a great thing all over the world! We have received help and support in many countries. Likewise, we have met many other travelers, on motorcycle, by car, by bike or on foot; far more than on our last trip, at least from Central America to the South. This is probably in the nature of things, as the Pan Americana holds stations and highlights that make a meeting almost inevitable. And the south tip becomes really narrow in the end… We had great encounters and enjoyed spending some time and quite some km´s together with other like-minded MC travelers.

We would like to thank you very much. Thanks to all the people we met during our trip!!! And we hope to meet many of those people one day, somewhere! The time passed like a blink of an eye and meanwhile we have August. So far, we hardly had time to look back. We had to find a new flat, to repair the motorcycles and Sascha had to get back to his job. Kerstin unfortunately struggles with her cervical spine since we returned. Two of the intervertebral discs do not look good and unfortunately have a nerve pinched so that it has become inflamed, but finally there is also an improvement here, albeit slowly.

But more about all this in a short while…